skip to main | skip to sidebar

My mother stayed at home while we were growing up. We lived in the country and while my dad was in town 15 miles away, my mom made meals, cleaned the house and ran a family of six kids. She was active in clubs, pursued her interests, and helped my dad at his office once we were all in school. Then, at 60, she went back to work – although of course she had been working all along.
We, as women, are certain of one thing: Our work is never done – whether that means taking care of our families and households, safeguarding our income, starting or resuming careers, and serving our communities. Yet there is much we can’t be certain of. We hope that we might wake up to less responsibility, or that others will come forward. But as we look around, especially to women just older than ourselves, we see the signs of working in retirement.
What is a poor woman to do? Well, the research is either old, from the 1990s, or disheartening. The National Council on Aging released its “Senior Debt Facts” in 2015. We are retiring with a load of red ink. At the same time, housing and medical care costs are skyrocketing. This is not intended to be a message of despair, but of the need for resilience.
Realizing we are all at risk for significant financial change is a key step.
Just like the overnight success that took 20 years, a woman wakes up to an economic fallout of aging. We suspected that men entered retirement differently, but there are so many other differences. How we look at ourselves and what steps make sense, including the return to work shapes the transition to retirement.
First, our collective shift toward reduced income should not come as a surprise. We aren’t retiring like our parents. For those approaching retirement, born in 1955 or earlier, we know our expenses are the same or will increase and that our income is capped at best. That rub, where expenses change but income doesn’t, may mean that someone in the household continues to work longer than expected. Or, like my mom, returns after a 25-year break.
That’s right, you don’t work, and life just got more expensive. Not immediately but slowly and surely. Society might imagine that someone will take care of you. In fact, you’ll most likely outlive your male spouse and use your physical energy and financial resources for him. If you’re not in a traditional relationship, or not in a relationship at all, you may also need to plan to be the CEO and workforce of your household.
But let’s back up. As women, what we don’t know is how our retirement might play out.
Women in retirement
Look back to when you started working. It may have been as a fill-in or involved situations that required you to be between-jobs because of child care, moving or some other household need. If your work history was filled with starts and stops, planning for retirement might have been on and off, as well.

Let’s get some figures down on paper. The median household in Long Beach is about $55,000.
If you are a woman who has been working most of her adult life, here are some considerations as you grow older in Long Beach. The average salary for men is $68,721. For women, it is $54,710. Not only do we make less, but fewer dollars are reserved for Social Security or other post-work pension funds. Double whammy. But it is worse than that. Many women who were born in the mid-1950s had intermittent work histories (by choice or otherwise) that limited salary growth, affected continuation of vested savings funds and resulted in patchy skills for their résumé.
Just think of a single senior getting $14,400 a year in Social Security and taking care of a couple of grandchildren or a relative who needs care. Clearly, the federal government hasn’t looked at the “for rent” signs lately. A one-bedroom for $1,200 is a steal. Taking out that pencil and licking the lead, a household living on Social Security and other modest sources of income is a recipe for homelessness.
When it’s more than dollars and sense
Unshackled by work? The myth of a carefree retirement is so last century! You may be feeling a little lost and unsure. How we are feeling is in large part based on our attitude.  A positive attitude is more than just having enough money. Attitude adjustment improves when you find reward in other parts to your life. And the research supports this. Studies suggest that having adequate funds is important, but other factors such as “having to retire” or the state of being in poor health make for a difficult retirement. Having a change in your marital relationship is also a precursor to poorer well-being.
Major upheavals can occur any time in life, but there may big changes just about the time you transition to retirement. Predictably there may be the need to move or adapt to a change in the household such as a grandchild going to college or an adult child moving out of the area for work. So, there is little to support the carefree retirement myth. Rather we need to bolster our readiness, have options and, of course, some financial flexibility. Money isn’t everything, but it helps. You may need more money whether there is a change in health, or a loss in your life.
A word on demographics


If there is a glaring lack of current research about women working in retirement, the knowledge gap only multiplies when women of color are considered. But the wealth gap is documented. According to a National Women’s Law Center report released this April: Latina, black and Native American women “must work well into their 80s or 90s in order to catch up to what a white, non-Hispanic man made by age 60, delaying their retirement even beyond their life expectancy.”

In 1988 research on aging, results showed African American women ages 62-65 were considerably more likely than whites to have worked steadily most of their adult lives, although black and white women expressed quite similar attitudes toward work. Reflecting their work histories, black women were more likely than whites to be eligible for pensions but were less likely to have retired.

Gender matters
Can we look to men for encouragement? Maybe, but a large analysis done in 2013 by a life insurance company suggests that men and women have different attitudes about saving money and different opinions about themselves as money managers. According to this study of over 1,500 men and women over the age of 25, one in four Americans say they would like to be more cautious with their money and have a lot of catching up to do to be where they want financially. Among women, 59 percent feel their financial planning needs improvement.
For some, there is not so much a transition to a new future but a new reality. Two scholars, Loe and Johnston have looked at female baby boomer professionals from a lens that includes relationships and refers to retirement for this segment of women as a process of “rebalancing.” Others describe the multiple roles women have during their adult life and how these get reshaped in later years. The idea of rebalancing intuitively makes sense.
For me, Ruth Karpen, hits the nail on the head. In her 2017 article, “Reflections on Women’s Retirement,” she lays out how boomers may change the idea, or rather bust the myth of retirement. She is clear that the designation of boomer may apply only to white, well-educated women – and that there is a world of diversity that has many implications. The larger lesson may be that retirement is personal, it is about relationships that make up a very large part of our life. 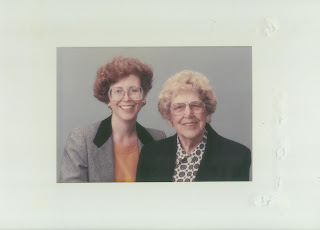 Caption for Photo – Gretchen Swanson and her mother Gladys Hooks, taken in 1980’s for a professional magazine article about two generations of physical therapists.
My experience is sharply different from my mother in financial status and attitude. As a boomer, I worked my entire adult life. No breaks for kids. Went out on my own without a salaried job. Moved to another part of the country, married, divorced, married. I’ve had to anticipate financial stability while running a small company – no real chance to save. Yet, looking at others like me, those born about the same time, with similar education and racial background, remains a good mirror. But I also look to women of color, recent immigrants, and those with different educational and cultural backgrounds, for some timely solutions. And maybe that is what we should do as the book is rewritten for our generation. Look at others, like yourself. And, look at others. A new and improved sisterhood.
The possibilities
But what to do? We all need to change as we age. Start figuring out your reality. Work with your resources and peer group. Maybe it’s your book club or a group at church. Your local library and community center offer ways to intersect with women from different backgrounds with common concerns.
Asking questions, you’ll realize that the nursing career you left a few decades ago might be a lead-in to working part time at a senior wellness clinic. Or perhaps your management skill set using industry-grade technology might allow you to work a short shift at an industrial site. Or you might utilize your late-model car and become an Uber or Lyft driver. I am impressed every day by the background and experience women of Long Beach have, offering services that are needed.
So, if work is in the mix, what can you do? Financially, some retired professionals and managers might have the option of working part time. However, it can’t be stressed enough that those scenarios need to be worked out with your tax accountant ahead of time. Worth every penny of their time. If you have been doing work that is physical, and don’t think it is wise to continue, then branching out is, well, tricky. Younger, well-trained and enthusiastic workers are available. So, building your options before you need to go to part-time work will help.
My mother is a constant reminder. She had a professional career but quit to raise a family. She had a great time until she needed to replace income that was lost when my father was no longer able to work. So, at age 60 she reentered the workforce. She remained employed until 72 – mandatory retirement from her state civil service position. My dad died when she was 62 and her income became a lifeline, the financial security was essential. Along the way she met large numbers of people who remained her friends until the end of her life.
But it was hard. She was alone at times, she was a “single,” her independent spirit needed time to reassert itself to begin new parts of her life, bridge club, bible study, attending her granddaughter’s soccer matches. Eventually, that spark was ignited. When she was in her 80s and long past her “retirement,” her kids got a call. “Would you go with me to Russia? St. Petersburg? This coming February?” Sad to say, none of us kids took the bait. But she went and had a terrific time. I still have the ushanka (Russian mink hat).


She never complained. But, she was happy to enjoy a beer and chips after a week of work and talk about interesting things. She found a way to make work work.
And that is a woman’s way.
Assisting Gretchen Swanson DPT, MPH with this article isKaren Chaderjian MSW. Gretchen and Karen both practice Tai Chi at Houghton Park Community Center. Watch for Join the Dots: Tai Chi On-Demand coming soon on YouTube.